When: 31 May 2008
Where: Southbound on San Gabriel Boulevard
Who: My parents and bubby
Weather: Warm, morning fog

On the way to graduation, my dad took the opportunity to hijack us once more and buy pork buns from a nearby Chinese bakery. His obsession with making me eat pork buns followed me all the way to college, where I’d never have to listen to him again.

When: 23 May 2008
Where: My bedroom
Who: Nobody
Weather: Warm and dry, interrupted by sudden rain in between.

Everyone has a particular story they like to tell at parties. This is mine, the story of how I memorized the English final, although this a longer version than I’m accustomed to telling.

I had some bad zits when I was sixteen. To stop myself from touching my face during class, I would always have a piece of paper on hand so I could make a list. It could be a list of anything, but US Senators were a particular favorite because there were so many of them. After two years after getting into this habit, I discovered to my surprise that I knew the names of every sitting senator, among other things. So I got a little extra credit in Government class, but thought no more of it.

In the meantime it was Grad Nite. All the graduating classes in the area were headed down to Disneyland for a strange, exclusive, nighttime Disney experience. Before we left there were some tornadoes in the Inland Empire, and in a moment of mild fear I told Jeannie I loved her. There was no going back, I meant what I said and had plenty to look forward to. But I shake this song.

This was my big South Park phase, and I couldn’t for the life of me find an mp3 of it. I liked not only the surreality but that it referenced an early part of the show. So I just listened to it via YouTube over and over. I am Gopher Boy pondering reality.

Grad Nite was appropriately weird. I ended up staying awake for 42 hours, but when the weekend ended the time had come to take my finals. And if you ever have the opportunity to ride a roller coaster in total darkness, I highly recommend it.

The English test was the last final I had to take. Finishing it would be my final act as a Bosco student, and I knew I wouldn’t do well. The teacher was a cool guy; young, hip, a real South Lake type. He taught me to love the Arcade Fire and hate the movie Juno. But he wasn’t a good English teacher. It was his second job anyway, but a big part of the class involved making us memorize romantic poems, especially Keats, and I could never manage it. Memorization had never been a strong point of mine, and my grade suffered.

At the same time, all of the tests he gave us were vocabulary words, and so would be the final. I knew what all the words meant, and how to use them, but could never remember what they all were, there were a hundred of them.

So I had a free period before the test. I was riding a high off the previous day’s Lost finale but dreading what was to come. I was loitering in the electronics lab when I saw Josh Corea cramming. And seeing him with all those papers made me realize something: I was perfectly good at memorizing. 100 words, 100 senators. So I asked him for some paper, and began listing all the vocabulary words. Just the words, over and over, for two and a half hours. I ventured into the darkened auditorium, desperately scrawled every word onto the paper, in alphabetical order. From there I filled in the test.

I was the first to finish, and I got an A. I raced across the school to catch the bus so I could be back in Pasadena in time for lunch.

When I got home, I bought train tickets to San Jose. Jeannie’s graduation was two weeks later than mine and I promised her she wouldn’t graduate a virgin. I had popularity, the girl of my dreams, and a job at a very popular gelateria. By nothing but a series of coincidences, I left high school on the highest note I could possibly imagine. 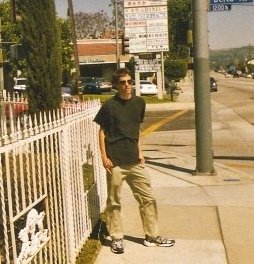 I am gopher boy, pondering reality.

Fewer than eight weeks remained of high school. Most of us had our fun, and trouble as well, and while even more of our staff had died since the winter, things were winding down. When the AP tests came, Mr. Godinez stopped teaching government and started showing us films like Thank You For Smoking– a movie that changed my life.

I was still hoping to have some fun in San Francisco. In just a few days I was headed to San Francisco State’s open house weekend. This meant missing Bosco’s open house weekend, but I had no other choice. And while I’d been discouraged by the near state-of-emergency caused by the passing of the olympic torch through that city, my first trip up had been thoroughly half-assed and I was hoping to make up for it.

I was introduced to this album by one of our collective girlfriends from Ramona, but whenever I listened to it I thought of San Francisco. What could possibly happen up there?

Fewer than eight weeks remained of high school, but for me those final days would far surpass anything that had happened up to that point.

Next: My first girlfriend.

2007 may have been the greatest year in the history of American television. The Sopranos ended, The Wire reached its peak, Mad Men turned the critics on their heads, and dozens of brilliant shows came into existence, though they may not have always fulfilled their potential. And the Writers Strike hadn’t put a dent in it at all– we had more than three months with nothing on, three months to catch up on everything we’d missed. And so I found Flight of the Conchords.

In a year dominated by groundbreaking dramas, Flight of the Conchords perfectly encapsulated the future of sitcoms. It fulfilled the promise of It’s Always Sunny in Philadelphia: lovable lowlifes, an ever-expanding mythology, and balls-to-the-wall silliness, made better by the fact that it was an HBO show, no ratings, no pressure. And it was a musical that I didn’t find unbearable.

I came by the show the same way I imagined most people did, but most people didn’t trek out to Glendale in the cold, dark night to find a store that had the DVD in stock. It was totally worth it, and the following Monday I extolled its virtues to Wyatt.

Wyatt was a strange guy; at school he was a blank slate, but every once in a while I got to peer into his real, secret life– making Warhammer parody videos on YouTube, seeing his girlfriend (who I knew!); it was a total contrast with the terse, reclusive narcolept I knew and loved. So it wasn’t a huge surprise to learn that he was an even bigger fan than me.

From that day to the end of school, every day I’d come into Design class, and I’d ask him: “Are you okay Bowie, what was that sound?”

Next: Ed Sullivan is still alive.

When: Pre-dawn January 2008
Where: Sierra Madre Villa Station
Who: Nobody
Weather: Cold, wet

There I was, in the dark, waiting for the bus, when I pulled out my air-ukelele. Made everything much better.

After the Starbucks fiasco, my main concern was the primary election. Partly this was because of Obama’s upset in Iowa, partly because I treated elections like sport, partly because of my newfound interest in a show called The Young Turks, and mostly because Bosco is for gambling. My daily schedule was as followed:

Wake up at 4:30 AM, walk to the train, take the train to the bus, the bus to school, spend an hour in the library reading the Wall Street Journal and chatting with Jim Thompson, our school’s resident drunk (he kept a jug of vodka on his desk during class and it was awesome).

English class with Stremel the Republican Hipster, then free period courtesy of being a TA, during which I would either read, catch up on Lost or listen to RadioLab. Then lunch, then design with Big-Time Okeyo, and finally world religions with Jauregui, then home. A perfect blend of social time and solitude.

I was there at five in the morning, waiting for the bus, some drizzle left over that left black ice on the ground. Cenk Uygur was talking about Heath Ledger’s sudden death and posed a question: Accident or Suicide, which was more tragic?

I switched to music.

Next: The crowd is here.

When: 16 December 2007
Where: My dad’s car
Who: My dad
Weather: Cold, intermittently cloudy

“And now my fears, they come to me in threes.” I’d heard the song countless times for years, but it never struck me the way it did that icy December. It was the sound of things getting worse. It was the sound of the horrible feeling in your stomach when you feel as if the walls are closing in. And, considering the timeframe, it was just about perfect.

Older people had always complained that Bosco lacked unity, that we as a school disparate and apathetic, but while the school’s rapidlt declining state left something to be desired, as students we had never felt closer. To the outside world that was all that mattered; so long as we wore our ties and said intellient things, people thought highly of us.

We were like-minded, mostly in good standing, and no girls to fight over. It came as a shock to the state government how open we were to gays; California public schools at the time might as well have been Saudi Arabia. We made money off each other, we gambled, we got along. And it was at this most crucial moment that everyone started dropping dead.

First it was Victoria in the front office, cancer. And then Brother Gene, cancer again. Coach Yurak was old, to me was just an irritable eccentric, a real Ron Swanson type, but he turned out to be much more, and when he died there was a big outpouring but it wasn’t completely unexpected. Two weeks later, my design teacher of four years died. Alex Chavez was 32, with more friends than you could count, a young son, and an undiagnosed heart defect. For him, we broke out the green ribbons. We didn’t sell them, we just gave them out. It started to feel as if anyone could go, and he wasn’t the last.

People showed up to his funeral from the old days, film club, old teachers, even Mrs. Plummer, who was supposed to be my english teacher back in freshman year but left. I couldn’t make it to the burial. Tomorrow was the beginning of finals. As my Dad picked me up, it played on the radio. A song of desperation hidden behind careful hooks and Motown-style production.

“And now my fears, they come to me in threes.”

When: October 2007
Where: CAD Lab, DBTI
Who: Chavez and my classmate
Weather: Raining
Book: I Am America (and So Can You!) by Stephen Colbert

It was the first rain of the season and fall had officially arrived. I was in the CAD lab working on drafts with Mr. Chavez, but I usually finished my drafts early and just drew cross-sections of the Death Star while listening to some podcast, or in this case music.