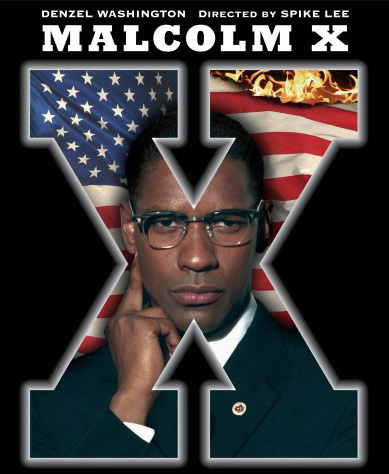 Few genres of film are more associated with pandering crap than biopics, and for good reason. To reduce an entire existence to the conventions of three-act story structure is artificial and ultimately disrespectful. It is the rare person who lives out the hero’s journey.

But Malcolm X was one of them, and Malcolm X is possibly the greatest biopic ever made.

Certainly it is one of Spike Lee’s best films, as well as one of Denzel Washington’s finest performances. The titular civil rights leader begins as an intelligent and charismatic young man who is nevertheless denied opportunities because of his race, and becomes a criminal. While incarcerated, he joins the Nation of Islam, and once freed becomes the magnetic spokesperson for an ideology just as bigoted as– indeed, compatible with– white supremacy.

This is the Malcolm X we know, the punching bag of talk radio and Fox News, but the story doesn’t end there. As he becomes disillusioned with the corrupt, scandalized Nation of Islam, Malcolm makes a pilgrimage to Mecca, prays alongside Asians and Europeans, and learns that people of different races can live in harmony. Of course, his new teachings cost him his life.

Malcolm X is much longer than most movies made after the 1950s, and that made Hollywood reluctant to fund it. Nonetheless, Spike Lee makes the extra time count, with a great true story and an all-star cast. Released at a time when education and the media had totally sanitized the Civil Rights movement, Malcolm X shows that overcoming is about more than pretty speeches: it’s about searching within and making some very difficult decisions. A