Before gaining dramatic prestige with films like Manhattan, Woody Allen was possibly the funniest man in America, whose special blend of the physical, situational, and ribald gave the world classics like Take the Money and Run, Bananas, and Sleeper.

Presented as the final film at the Old Pasadena Film Festival, Sleeper tells the story of Miles Monroe (Allen), a nebbishy health food store owner who is frozen in 1973 and defrosted 200 years later by a group of rebels against the current autocratic government. In a prescient bit of Orwellian paranoia, Monroe is the only person who can stop the government’s next plan because he is the only person in the world who is “off the grid.” Before he can acheive this goal, he finds himself tied down to a haughty socialite (Diane Keaton) before the real plot resumes.

Sleeper’s deconstruction of raygun gothic and ‘70s dystopian sci-fi is nothing but pure joy. There isn’t much to say except that I’d easily put it up as my second favourite Woody Allen film after his very first, What’s Up Tiger Lily? A

Before seeing this at the Old Pasadena Film Festival, I happened to catch the American Masters episode on Mel Brooks. Young Frankenstein was a difficult movie to make. Despite the fact that it’s a fun film and everyone had fun making it, 20th Century Fox was fiercely opposed to making any film in black and white. But Brooks won out and today we have one of the world’s most beloved comedies.

Set in the present day, Gene Wilder plays the great-grandson of the original Dr. Frankenstein. The new Dr. Frankenstein, who insists on pronouncing his name “Frahnken-steen,” is calm, rational, and quick to distance himself from the family legacy. But when he must go to Transylvania to inspect the Frankenstein estate, he discovers the secret to his ancestral madness and sets out to create a new “monster.” Unfortunately, his assistant Igor (pronounced “eye-gore” and played by Marty Feldman) uses an “abnormal” brain to result in a troubled creature (Peter Boyle).

I honestly came out of this film feeling a bit disappointed. Certainily Young Frankenstein is funny, but I was expecting one of the greatest comedy films of all time, and this was not that. Still, it’s a fun, funny film that pays homage to the Universal original that came out only 41 years before. B

SPOILER ALERT: As these reviews are of an academic nature, they may contain spoilers. Those that do feature this warning. Future reviews will try to limit spoilers for a public audience, but until then, read at your own risk.

If nothing else, Sisters is a cracking homage to Alfred Hitchcock’s 1950s prime. Nowhere is this more clear than in the first act of the film: the rich colours, the score by Bernard Hermann, the decoy hero, and a crime witnessed from the real protagonists rear window.

In Sisters, Margot Kidder plays a former Siamese twin who previously lost her sister after she became impregnated by their doctor. After losing her emotionally disturbed counterpart, Kidder starts to become her from time to time, resulting in the murder of one of her suitors. When reporter Jennifer Salt sees the murder, the cops take too long and the evidence has been cleaned up. Undaunted, Salt begins investigating the crime herself, but is hypnotized into believing she saw nothing. At the end, the bad guys are caught, and Salt is believed by everyone…except herself.

What distinguishes Sisters from Hitchcock is two things. Made after the abandonment of the Hays Code, the murder scene is much more graphic than it would have been a decade earlier, and the viewer’s sense of dread is far more heightened. More unusual are two setpieces in the film’s third act: the hypnosis scene, where various characters appear randomly in the protagonist’s own psyche, and again at the end; when the final piece of evidence lies unremarked upon, except by a cow. If nothing else, the film’s ending is reminiscent of David Lynch, whose first feature film Eraserhead was released just four years after this. B+ 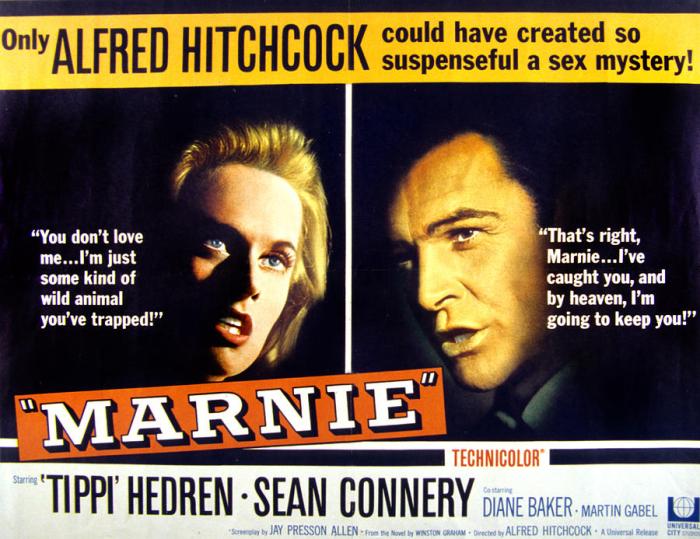 SPOILER ALERT: As these reviews are of an academic nature, they may contain spoilers. Those that do feature this warning. Future reviews will try to limit spoilers for a public audience, but until then, read at your own risk.

Tippi Hedren is a woman with many names. She doesn’t believe in men, only money, but for all her strengths she is helpless when presented by a thunderstorm or the colour red– reminders of a childhood trauma that she herself has forgotten. When she is caught, she is blackmailed into a loveless marriage to a man with more up his sleeve than just sex.

These past several weeks in TVF 462, we’ve been watching a lot of Hitchcock. That might colour my opinion of this film, but I’m not the only one who found it problematic. Even without the infamous rape scene, co-star Sean Connery substitutes menace for intrigue, which is all the more upsetting because the viewer doesn’t understand what he’s after. Connery seems adrift without an action setpiece, and I can’t remember a time when he was less charismatic. Meanwhile, Hitchcock dangles the film’s central mystery far too long. Without any hints along the way, the grand finale is underwhelming.

This isn’t a coincidence: critically acclaimed but a commercial flop, Marnie showcased some of Hitchcock’s worst personal qualities. When Tippi Hedren refused to work with him again in Torn Curtain, Hitchcock attempted to ruin her career. The film itself precipitated the end of Hitchcock’s cultural caché until his retirement and death. Paired with a perpetually gloomy motif, it’s a film I’d not likely revisit in the future. C-